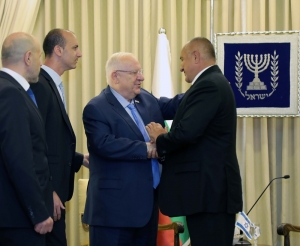 During the visit, the Prime Minister and his delegation had meetings with the Prime Minister of Israel - Mr Netanyahu, The President of Israel - Mr Rivlin, the Opposition Leader - Mr Herzog, the Mayor of Tel-Aviv - Mr Huldai, the Patriarch of Jerusalem, the Leaders of the American Jewish Committee - organized by Mr Victor Melamed, and other meetings including a brief visit to Ramallah. The delegation also visited the Holy Sepulcher during Mr Borisov's birthday. Mr Borisov was accompanied there by the Bulgarian Orthodox Church Metropolitan Antony. The captain pilot of the plane of the delegation was Mr Yanko Georgiev - CEO of Bulgaria Air. Mr Emil Magrisso - Secretary General of BCCBI accompanied and supported the delegation as translator.